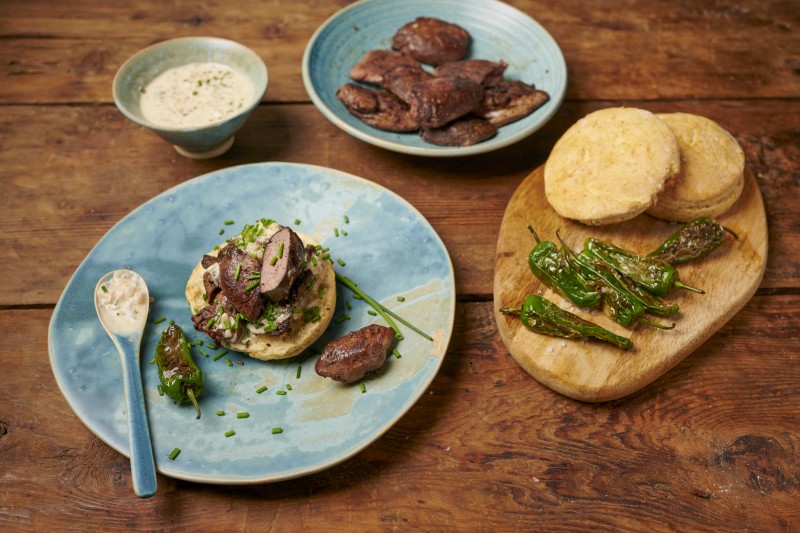 Use for the recipe

Start by making the biscuits. Put the duck fat in the freezer for 10 minutes until firm.

Add the lemon juice to the milk, stir and leave for 10 minutes.

Mix the flour, sugar, salt, baking powder and baking soda. Add the cold duck fat and mix with a fork or knife for crumbs.

Pour in the milk and stir until the products are mixed.

Transfer to the kitchen counter and without kneading, fold the dough 3-4 times, similar to croissant dough, to get layers in it. Roll out on a sheet 3 cm thick and cut 4-5 biscuits with a diameter of 10 cm. You can also make smaller biscuits.

Arrange in a pan covered with baking paper, spread cream on top and bake for 15-18 minutes in a preheated oven to 220 degrees until golden and crispy.

Add the broth and lemon juice and cook until the liquid is reduced by half again. Finally, pour the cream and reduce again until you get the consistency of a sauce. Add salt, season with white pepper and remove from the heat. Finally add the chopped chives. The sauce will thicken slightly after cooling.

Clean the livers if necessary and separate them, keeping them intact. Add salt and season with white pepper and pierce with a sharp knife so that they do not spray during cooking.

In a large skillet, heat 2 tbsp. of olive oil and put half or 1/3 of the liver, it is important not to overfill the pan. Cook for 2 minutes, turn carefully and leave on the stove for another 1 ½-2 minutes. The livers should remain pink on the inside and well reddened on the outside.

Before removing from the pan, cut one and check the degree of baking.

Cut the biscuits in half crosswise and place one half in a serving dish.

Spread with a little sauce and put a few livers on top.

Drizzle with a little more sauce and sprinkle with chives. Garnish with lightly fried hot peppers.

Serve as an appetizer.